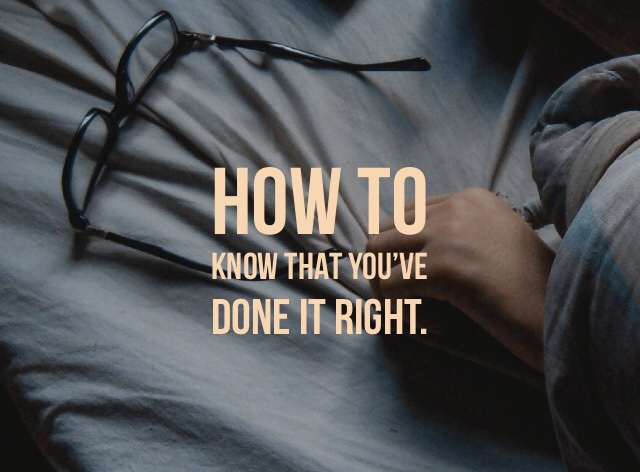 A while back I wrote a post about something I heard an agent say at a conference. She said that our task, as writers, is to make her want to take the book to bed with her. I loved that. Because don’t we all read in bed? And isn’t falling into a good book a little like being seduced?

Well, after a more recent post about finding my agent, a new friend on Twitter asked me this:

I responded that I just kept working on it until I had a gut feeling that it was ready. And that’s true. But the question has been nagging me. I mean, I wrote so many versions of this story. I probably had fifteen different endings. How did I know that none of those drafts was the one that deserved a final polish and a hearty send off?

How to Know When It’s Done Right

For me, it wasn’t about done. Every draft I wrote checked the boxes of a legit book. Each one was long enough. Each had a beginning, middle and end. Each had interesting characters overcoming obstacles. Friends becoming enemies, enemies becoming friends. The way I see them now though, in retrospect, is that they were done, but they weren’t right.

I didn’t get the story right until I realized what it was I wanted to say.

And for this realization I give credit to the writer and speaker William Kenower. I was sitting in on his presentation at the Writer’s Digest Novel Writing Conference in October when the light bulb went on.

Fill In The Blanks

He was talking about narrative arcs. I won’t go into detail, because I won’t do his ideas justice (I highly recommend you buy his book), but with one statement he helped me to see what my story was really about. He said to fill in the blanks of this sentence: My story is about the difference between _____ and ______.

I thought about that for a minute. For seventeen drafts, the one thing that remained consistent in my story was a main character who needed to learn to face her problems. My story is, and always had been, about the difference between avoiding our problems and facing up to them. Get this. It took me eight years of writing to realize that I was telling a story, set on an ostrich ranch, about people who live with their heads in the sand. I actually laughed out loud.

And the best part? When I got home and read through my draft I saw how that idea was already there. Just going on instinct, I had written this idea into much of my manuscript. It just needed a little tweaking. I spent the month of October rewriting a few sections, then November and December doing a fine-tooth-comb polish. And then I just knew. It was done.

I knew it in a way that I hadn’t before and the difference was that I had finally put together a story that explored the ideas I wanted to explore. I knew that I could send it out to agents and even if (when) I got rejections (and I did) I would feel confident that the manuscript was what I wanted it to be.