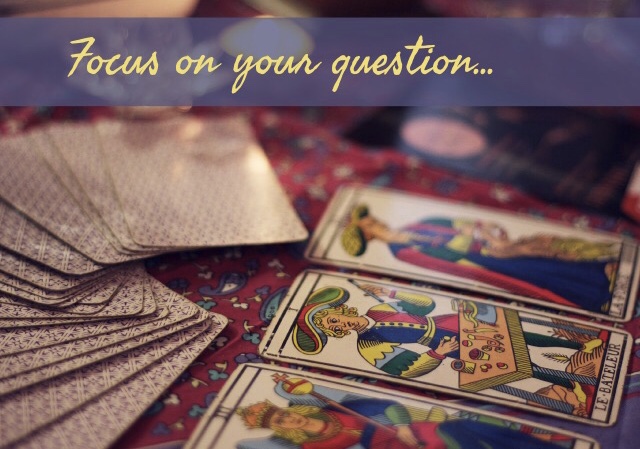 Last week I was at a Halloween party where a tarot card reader was telling fortunes. I love fortune tellers. I love to geek out over their predictions and try to suss out how much is coming from some cosmic source and how much they’re just reading me. So of course I was the first one to sit down.

She told me to shuffle the cards while thinking of my question and the one that came to mind was: how do I build my writing career? Well, she wasn’t the greatest card reader. She asked me to tell her my question, so I did, and the rest kind of felt like a therapy session. But there was one thing she said that stuck with me. She told me that if I didn’t know what my goals were, I would never reach them.

Um, duh. This is not rocket science. This is not even fortune telling. This is just plain common sense. But I had to admit, I don’t have any goals in place right now.

The thing is, I’m usually ALL ABOUT planning. I mean, if you follow along at all you’ve seen my bullet journal posts. You know I’m a total nerd for making plans and executing. But here’s what I realized: for the longest time my goal was simply to finish my novel and get it out into the world.

Well, it’s not out in the world yet, but it has been bought by a real honest to goodness publisher and has a publishing date set for March of 2020. Done and done. And while I wait for things to progress on that front, I’ve been working on another story. I just finished a draft of that one last week. It’s a mess, but its a story. So I’ve just been writing and writing without any real sense of what my goal is.

I know I want to make a living with my writing. Good news for me is that I don’t have to make six figures to make this happen. My husband makes a good living, so I really only need to bring in half of our household expenses. That’s a goal.

But there are just so many unknowns when it comes to writing and income. A person could write a dozen books in obscurity and then have a breakout hit that makes bank. They might get a book optioned by Hollywood and make some money that way. They might hit it out of the park on their first go, getting a six-figure advance on their debut, and then not be able to sell their next book because they didn’t sell out their advance.

There are just so many unknowns around the money side of a writing career that it’s hard to hitch my goals (and my eventual joy or depression) on whether I hit some arbitrary financial goal. It’s not about the money. (That said, if you’re curious, this website does an interesting breakdown of what some writers are making.)

So I’m inclined to set other goals, centered around inputs I can control, and hope the money comes sooner rather than later.

When I first met with my agent he asked if I thought I could put out a book every year. I’ll admit I flinched. He adjusted: how about a book every two years? Well, this idea is actually really appealing to me. At that rate, the odds of making money go up. Not only is a writer more likely to get to that one book that is a big hit, but with each book you gather a few more readers who like your books and might be inclined to buy them when they hit the shelves. They might go back and buy your previous books.

Some writers write four books a year to reap the benefits of accumulated work, but there’s just no way I can do that. Maybe if I had started writing before I was a mom, before I started spending five hours a day driving these little people to various practices and appointments, not to mention a husband that I actually like spending time with. Oh, and my two blogs. There’s no way.

But a book every two years? That I feel like I could plan for.

I started thinking about how, as I pushed to wrap up the draft of my second story, I was writing about 2,000 words a day without sacrificing too much in terms of life balance. At that rate I could put out a rough (and I do mean rough) draft in three months.

But then, I’m supposed to get notes from my editor on my first novel this week. Contractually I have four months to make the edits, but I’m hoping I can do them in three.

Then, I will switch to outlining novel 3. Yep, I already have ideas in the works, I just need some focused time to get it all worked out. I have never made outlining my main writing activity. I didn’t outline novel 1 at all (which I’m pretty sure is why it took my nine years to write it). Novel 2 I outlined while working on novel 1 and that baby was SO much easier to write. Turns out I’m a planner (big surprise, right?)

Anyway, I’ll spend three months outlining novel 3, then jump back to do another draft on novel 2, then work on a first draft of novel 3. I sketched it out on some graph paper. Here’s what it looks like: 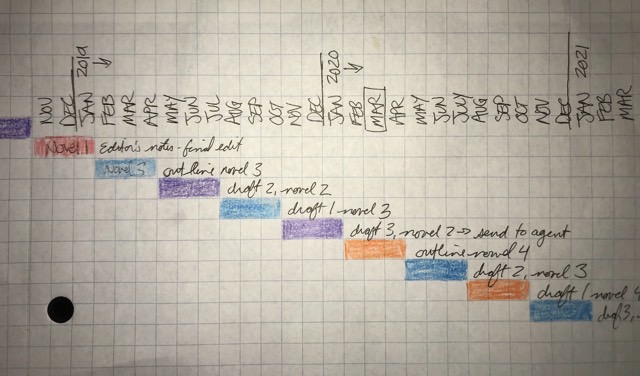 The question is whether I can actually keep up this schedule. Because if I could, I would be sending a manuscript to my agent in January of 2020 AND January of 2021. I haven’t accounted for time editing in response to my agent’s feedback. Because I don’t know how long it will take to get feedback. There are frankly just too many unknowns. But if I could…

All of this is to say that it’s hard to know how to set goals as a writer. There are so many external variables, so many things we can’t control.

How do you set goals? Do you go with dollar amounts? Do you maybe go for awards or accolades of that sort? Number of copies sold? I’m so new at this, would love to hear your thoughts.