A couple weeks ago I had the honor of attending the Pasadena Festival of Women Authors. If you follow along at all with my blog, you know I’m a big fan. This was my third year and each time I’m just aglow with bookish goodness for days afterwards.

If you’re anywhere near Pasadena, you should get on their mailing list so you hear when tickets go on sale – then you have to move fast because the event sells out in, like, a day. But it’s so worth the effort.

As always, every women who spoke had my full attention. There were so many little puffs of knowledge and insight that floated out into the air over the course of the day. But the author who really floored me, and I mean left me stunned, was Hannah Tinti. 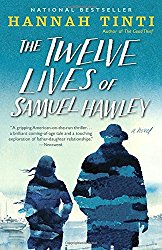 Hannah Tinti is the author of The Twelve Lives of Samuel Hawley, a story about a father who protects his daughter from the legacy of his violent past and the truth about her mother’s death. She also wrote The Good Thief.

She started off her time at the podium talking about some of the trials and tribulations she has faced as a writer. In the three years I’ve been going to the festival, this kind of don’t-lose-hope-even-when-things-are-bad narrative is pretty par for the course, but then… oh but then.

She talked about the importance of facing our fears. She gave a point-by-point strategy for dealing with fears, which, as I look at my notes now, I realize I can’t do justice. In a nutshell she said we should name our fears, declare a place of sanctuary that we can retreat to, grab a broom and chase those fears, and sometimes just pretend we’re not afraid until the truth catches up.

But talk is cheap. It was what she did then that floored me.

She had the audience snap with her, in a rhythm. Once the whole room, hundreds of (mostly) women, were snapping in time she shook her head and smiled. “I can’t believe I’m doing this,” she said. Then, after one more deep breath, she sang.

She sang as beautifully as any jazz singer I’ve ever heard. It was like she’d been doing it all her life. It was a mournful song, full of longing. I looked it up later that afternoon. It’s called My Love Is by Diana Krall. It’s a beautiful song, but really, the recording I found didn’t have anything on Tinti.

That took some serious bravery. I was so impressed.

Find a Place for our Pain

Should COULD have dropped the mic at that point, but she went on. She told a story about a man who had once suffered from phantom limb syndrome. He had lost a hand in an accident and even though it was gone he could still feel it. It felt like it was clenched in an excruciatingly tight fist and he couldn’t let go.

Long story short, a doctor discovered that by using a mirrored box, he could make it look like the missing hand was there. The one-handed man clenched his remaining hand, put it in front of the mirror and then opened it. His brain saw two hands relax and suddenly, the missing hand didn’t hurt anymore.

In truth, before the festival, Hannah Tinit wasn’t really on my radar. But if her writing has a fraction of the bravery and truth that her thirty-minute talk contained, it’s gotta be good. I can’t wait to read her books.