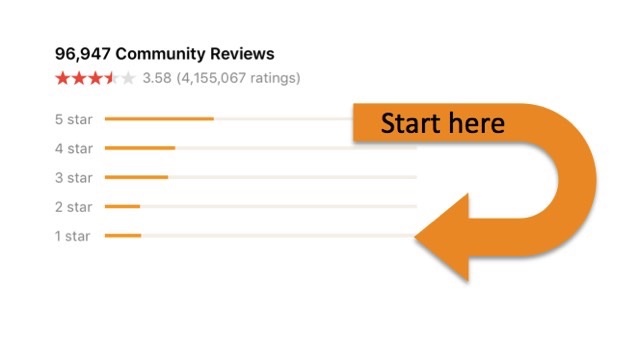 I had lunch with a writer friend of mine recently. We were talking about the projects that we’re working on, and the challenges we’re facing, when the conversation turned to GoodReads. My friend told me that she’s been using GoodReads to see where other writers have pissed off their readers.

And she did. It’s freaking brilliant.

First, she said, she made a list of comparable novels (“comps”). Her WIP has some specific, historical elements that she feels a little nervous about writing, so she chose comps that specifically address the same or similar elements.

For instance, say you’re working on a story about vampires (and I’m totally making this up – my friend’s story is NOT about vampires). You might add Twilight to your list. Maybe. If you’re writing a book about vampires, you probably know more about the topic than I do, and can probably name more than one book. So do that. Make the list as long as you can.

Do Some Sleuthing on GoodReads

Go to goodreads.com and type in the name of one of your comps. Then, where the website lists the star ratings for the book, click to view the one-star reviews and dig in.

What did people hate about the book? Was there something that haters consistently complained about? Once you feel like you’ve got a sense for the gripes people had, switch to the four- and five-star reviews and see if any of those complaints pop up among readers who loved the book.

As a writer, you would be smart to take note that readers really need to understand the extended background/history of your vampires.

A Word of Warning

Opinions are like assholes though, right? Everybody’s got one. This little trick my friend was telling me about can go south REAL quick if you get sucked into trying to write something everybody will like. You can’t do it. Writing is art. There is not a single piece of art in the world that everyone agrees on. Let it go.

Do not read “sparkling vampires are lame,” and then decide that your vampires can’t sparkle. If your vision for vampires includes sparkles, you go on with your bad self and make them sparkle. (Except, that’s not a good example, because everyone will know you stole that detail from Stephenie Meyer.)

POINT IS – don’t let other people’s opinions shape your story. Instead, consider that we can all learn from other people’s mistakes. Even if we can’t sit down with our favorite authors for a one-on-one coaching sessions, we might be able to glean, through the feedback of readers, where a story fell a little flat, then turn that knowledge to our own writing and see if we can do better.