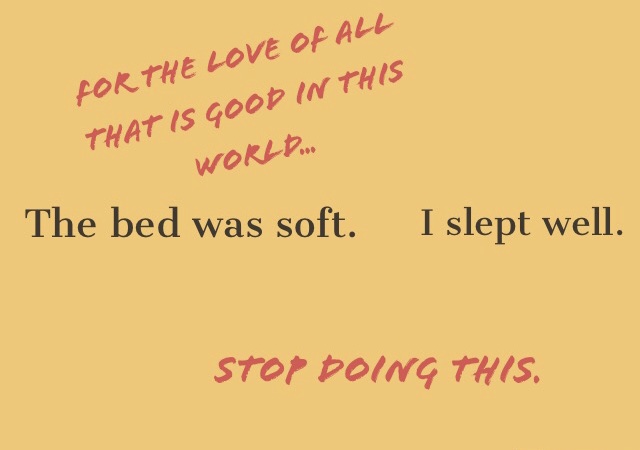 I was doing some freelance work a while back, working with a small marketing team, and I was lamenting the prevalence of double spaces after periods. It’s a pet peeve of mine. The woman I was working with, who was about fifteen years younger than me, voiced her theory that people tend to hit the space bar twice because that’s how texting works (for the old fogies who don’t know, if you hit the space bar twice while you’re texting, you automatically get a period – very handy).

I paused for a moment and said something that made me sound really old, something like “that’s why someone from YOUR generation might hit the space bar twice, but in MY DAY, when we learned to type on typewriters, we were taught to hit the space bar twice after a period to give a little extra space before beginning a new sentence.” Nothing says “over 40” like those double spaces.

To be fair, because I’m really not THAT old, I fall somewhere in between. I actually learned to type on a word processor. A Brother (anyone remember those?). And by then you didn’t have to hit space twice because the computer automatically put 1.5 spaces after a period.

But whatever the reason, there is a whole contingency of people who put two spaces after every period. So I’d like to state for the record: you don’t have to do that. ALL modern fonts put 1.5 spaces after a period, so that you get that elegant bit of extra space before the next sentence starts.

Cleaning Up in Word

Most word processing programs have a find-and-replace function, so if you have a manuscript full of double spaces, all you have to do is use this function to clean up your document. In Word, for instance, go to Edit -> Find -> Replace. In the “find” field enter two spaces. In the “replace” field enter one. It will look a little strange, since you don’t actually see anything in either field, but hit “Replace All” and the program will automatically tidy everything up for you.

If you’re one of those people who kind of goes crazy with the space bar every now and then, hitting it two or three or even four times, you might have to repeat the above process a few times, replacing three or four spaces with one.

Tidying Up in Scrivener

If you have Scrivener, it’s even easier to clean up your manuscript. Just go to Edit -> Text Tidying -> Replace Multiple Spaces With Single Spaces. 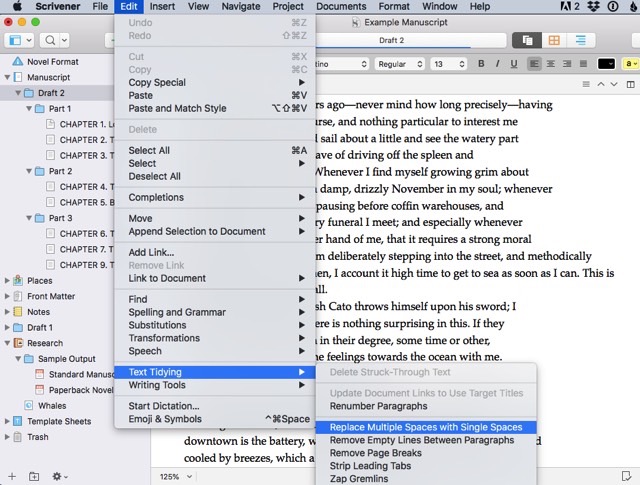 You’ll also see options there to remove extra lines or page breaks. These are new since the 3.0 upgrade. Pretty cool. Especially when you get to the point that you’re doing a final polish for publication. Yeah Scrivener!

And down with unnecessary spaces!

On October 13, 2019, I will be teaching a webinar titled “Demystifying Scrivener.” This crash course will explore the myriad ways in which Scrivener can make your writing process smoother and more organized. If you haven’t yet purchased Scrivener (or are using the free trial version), you can get 20% off the purchase price when you register for the webinar. Suitable for new Scrivener users as well as long-time users who want to learn how to use the program more effectively. To sign up, visit the Pen & Paper Writing Workshops website.